Southeast Missouri kid in competition for best mullet in country

KENNETT, Mo. (KBSI) – It’s all business up front and a party in the back. We’re talking about mullets of course. And right now, 25 kids from across the country are vying for the title of “best mullet” in the USA.

Zander Trainer is one of 25 finalists in the USA Mullet Championship kids’ division.

From spiky tops to shaved sides, it’s a competition to see who has the best mullet in the country.

Voting started this week and is open through Friday.

Kids are vying for a top prize of $2500 as well as bragging rights.

Before he got to this point in the competition, Zander just was looking for a new hairstyle.

Three years ago, his dad suggested a mullet. Zander liked it and he has kept the style ever since.

“My husband is like, ‘Let’s do a mullet.” And Zander is like, “What’s a mullet?’ So we told him. He said, ‘Yep that’s what I want.” And since then that’s all he’s been obsessed with then. He will not cut it,” said Gabby Trainer, mother of Zander.

After two years of having the eye-catching hairstyle, Zander and his family found out about the mullet competition and they gave it a whirl.

In Zander’s first go-around, he wound up in the top 100, before getting eliminated, but something about the competition stuck with him and he knew he wanted to compete again.

So, his family and other important people in his life, like his teachers Hannah Burke and Melissa Barnes, kept Zanders’s spirits and his hope up for his second go-around at the competition.

“In this for three years and it’s just exciting for him because this is one of his little dreams and we’re going to let him express it, right buddy,” said Trainer.

Tap here for information on how to cast your vote in this mullet competition. 2022 Kids Division Voting – USA Mullet Championships

Southeast Missouri kid in competition for best mullet in country 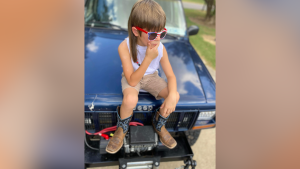