MARION, Ky. (KBSI) – The water distribution is still happening in Marion, Kentucky since the city’s primary source of water had been drained at Lake George.

Sandbags have been placed around the overflow weir at City Lake with city officials in hopes it will hold raw water due to rain.

Despite the rainy weather Marion had over the weekend the water rose to only one tenth of an inch.

While other places around Marion caught one to two inches.

“We’re still doing water distribution as normal, we actually went to four days a week now, and that is hopefully going to be our permanent schedule from this point forward,” said Danielle Duncan, Planning and Zoning Coordinator with the City of Marion

With this new routine, citizens of Marion are hopeful for a new water supply.

But until then this is the new normal, along with a boil water advisory the city put in place July 7.

Marion citizens are expected to only use bottled water for drinking and cooking until further notice. 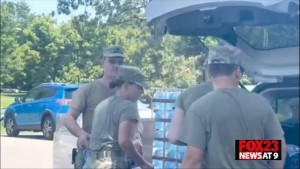 Are you prepared for back-to-school traffic?