CAIRO, Ill. (KBSI) – Rise Community Market opened its doors to the community of Cairo for a preview of what is to come and to show off the progress of the grocery store since announcing its plan of action a few months back.

I spoke with Marcella Woodson, Rise Community Market committee member who says tonight was a chance for Cairo to witness the vision.

“A chance to have a vision of how the grocery store is going to be set up, some of the benefits and opportunities of actually becoming a member or a shareholder along with some of the work that’s actually been done and implemented right now over the next couple of days,” said Woodson.

The work is expected to be completed in January and open on Jan. 16 –also known as Martin Luther King Day.

The new store also means the opportunity for a stronger infrastructure.

Rise community has begun searching for a store manager among other positions.

Bringing a stable grocery retailer and more jobs to the area is vital to the community’s growth.

John Shadowens, extension educator of the University of Illinois, says that bringing the store to Cairo they needed to do it themselves because bigger supplies wouldn’t.

The solution for getting groceries into Cairo is for the community to do it themselves” said Shadowens.

And what started with few believing in their own vision to help Cairo, now is coming to fruition.

“A more hope again it’s been many years since community citizens were able to shop locally and buy food,” said Woodson. 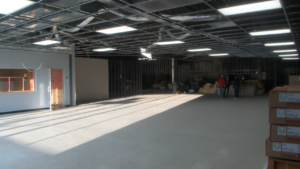 Check road conditions before heading out

MoDOT bracing for another winter storm