CAPE GIRARDEAU, Mo. (KBSI) – Tuesday is primary election day in Missouri, and Cape Girardeau County is looking to vote for a candidate.

Voters in Cape Girardeau County will vote to fill a Missouri House of Representatives seat that has been open since the first week of January after former Representative Wayne Wallingford resigned to become the new Department of Revenue director.

There are three Republican candidates in this year’s election

“We need someone who’s entrenched within the community and his family is and is already in a leadership position within the city and his well versed on what we’re doing locally what opportunities there are what initiatives we’re working on what challenges we face so we can carry that message forward and make sure that people of paper are well represented in Jefferson City,” said Thomas.

Candidate Elaine Edgar was not available for an in-person interview but released a statement encouraging voters to look past already established leaders and vote for new leadership.

“I will fight to keep critical race theory out of our schools and pornography out of our libraries, and will always hold true to the fact that our constitution is the law of the land,” said Edgar. “The lack of development, increase in crime, and slow growth is exactly why we need new leadership.”

“Because I want there to be a vigorous debate on several issues one of which is abortion rights. The other is gun control, common sense gun control. And the third is the local economy and how we can best improve it,” said Leighton.

Leighton will face off against the winner of the Republican race in the November election. 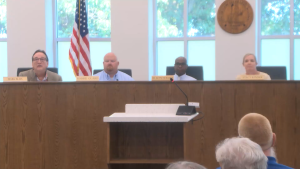