Community-wide Juneteenth celebration to be in Cape Girardeau

It’s the second year that Juneteenth has been an official federal holiday.

Ronald North, the chairman of the Juneteenth committee in Cape Girardeau, says that Juneteenth has always been a big celebration in his life.

“Juneteenth was always there but it was kind of surprising to know that not very many people knew about what Juneteenth was,” North said “Where I’m from we celebrate Juneteenth like it’s a huge deal.”

Ronald says this year’s theme of Juneteenth is called “Doing It Together” because he wants the Juneteenth celebration to help bring all of the community together.

The place where the Juneteenth celebration will be held is filled with a strong history of its own. Ivers Square, named after James Ivers and his family, was once a place where slaves were bought.  Ronald says hosting the event there has brought things full circle.

“That’s just a symbolic place they used to actually sell slaves that Ivers Square and so the symbolism of having Juneteenth there and the theme of this Juneteenth being doing it together and trying to bring the community together to me it just it’s like coming full circle,” said north.

And Steven Hoffman, professor of history at Southeast Missouri State University, believes that the Juneteenth community-wide holiday is the start of showing togetherness. 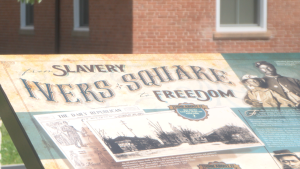