Operation Cross Country XII consisted of nearly 400 individual operations that took place across the country over the course of two weeks.

The average age of victims was 15-and-a-half years old, while the youngest was 11 years old.

A total of 85 suspects were arrested nationwide.

Since the beginning of the pandemic, children have become more susceptible to human trafficking as predators moved online to attract their prey.

The Southeast Missouri Network Against Sexual Violence (SEMO NASV) Development Director Alix Gasser says the best thing to do to prevent online abuse is to educate your children.

“One of the things we talk about a lot is with parents specifically is have those conversations early and often. The more you talk about it the more comfortable kids are going to feel disclosing the information,” said Gasser.

“There are over 500,000 predators online everyday, and they’re going to do things that they can,” Gasser said.

“As far as cases being reported, the numbers went way down and that’s because kids weren’t in front of mandated reporters in schools. So the abuse side of things, you weren’t seeing as many reports because they weren’t in front of teachers,” Gasser said. “Whether that’s trafficking, whether that’s abuse, physical or sexual, to children, be that voice for them and report it.” 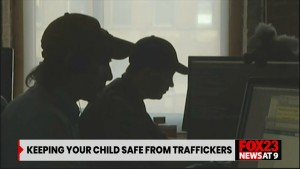