CAPE GIRARDEAU, Mo (KBSI) – Two weeks ago, Street-Level, an organization that hosted Sunday picnics with the homeless community, were told they needed to relocate from the Cape Girardeau fraternal order of the eagles building they have used since May.

Street-Level president Allie Miles says they used it as a safe place.

“Really wanted a space for them to come inside to where they can cool off, they’re out of sight, a safe space,” said Miles.

Currently, the Eagles Lodge is concerned about Street-Level events, their overuse of power, and overflowing trash at the aforementioned events.

“Plugging in and using our electric and never asking or no consultation about it, so [it] became an issue,” said Castleman.

Eagles Lodge Secretary Thomas Castleman says other issues that faced were people sitting outside and bikes chained up to poles.

Miles says that from the beginning boundaries were established and they followed them.

“I mean, from the very first picnic we made it clear to everyone that came and also the board made it clear to the volunteers that this is a space that we will leave better than how we found it,” said Miles.

Eagles Lodge extended Street Level’s stay until after the summer but felt cutting ties now was best for their business.

Miles and Street Level appreciate the help that they say is hard to come by.

There’s no animosity on straight level’s part; we are incredibly grateful, incredibly thankful for the time that they allowed us to be there,” said Miles.

Street Level says they will continue with their thanksgiving dinner this Sunday at Veterans of Foreign Wars [VFW] in Cape Girardeau. 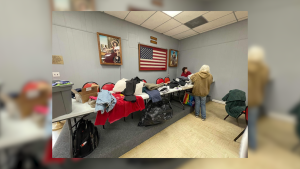