Now that push has landed the issue on the Missouri ballot.

On November 8, residents will be able to vote on the legalization of recreational marijuana in the state.

While the issue is finally on the ballot, not everyone agrees this is the best way to legalize the controversial drug. They say the initiative on the ballot isn’t really legalizing marijuana.

“Legalization but really it’s very limited they don’t they create possession limits and possession penalties so for instance if you under there under the legal Missouri campaign if you possess more than 3 ounces of marijuana you could have a criminal charge you could even have a felony charge if you have over 6 ounces right got to us that’s not legalization,” said Eapen Thampy with Great States Strategies.

“There are multiple major issues with this new IP coming. One of which is how tone deaf they are in a time of criminal justice reform on this particular issue,” said Price.

We couldn’t reach representatives with the “Legal Missouri Campaign” that helped get the issue on the ballot in its current form, but they explained their reasoning in a Facebook post.

“We wrote the #legalmo22 marijuana legalization language with a quick and efficient implementation timetable in mind to ensure that consumers have safe and legal access expeditiously.”

With concerns being raised, Missouri Secretary of State John Ashcroft says that as with all voting issues, he urges people to do their research before coming to a decision.

Marijuana on the November Ballot 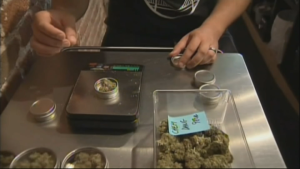 Vaccine appears to protect against Monkeypox, per CDC

US announces $1.1 billion more in military aid for Ukraine