CAPE GIRARDEAU, Mo. (KBSI) – The Missouri Department of Transportation public meeting was at Gordonville Elementary to share their study findings and to discuss the future improvements to Route 25 and Route K.

Tim Pickett, MODOT project manager, says that after the study they decided on a roundabout.

“What we found out was that you know the roundabout would provide operationally you know it would operate better,” said Pickett.

Pickett says another reason for the roundabout is safety.

With the roundabout, you’re bringing traffic in, it or reduce speed 20 to 25 miles an hour, you’re reducing the number of conflict points for drivers,” said Pickett.

But local residents have concerns.

Rick Margrabe says that he worries about the cost of the roundabout versus the traffic lights. And especially if the route grows to 4 lanes.

“I think in the future, I believe if 25 ever expands to four-way, they’ll be right there on it already with the traffic lights. Otherwise, they’re going to have to tear the four-way roundabout out and move it either further down or expand it larger,” said Margrabe.

Pickett says that the overall project will include improvements to the center turning lane along Route K.

The cost of the roundabout project will be approximately $2,000,000 if they went with the traffic signals, the cost savings is roughly $600,000.

But again, Pickett says the big deciding factor was safety.

The project plan is expected to commence next may, with construction beginning as early as summer and completion anticipated in winter 2023. 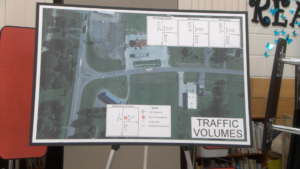 Tamms man arrested after another man shot in the head