(KBSI) – Several area politicians are releasing statements after the Supreme Court ended constitutional protections for abortion that had been in place nearly 50 years.

“Nothing in the text, history, or tradition of the United States Constitution gave un-elected federal judges authority to regulate abortion. We are happy that the U.S. Supreme Court has corrected this error and returned power to the people and the states to make these decisions,” Governor Parson said.

“With Roe v. Wade overturned and statutory triggers provided in HB 126, we are issuing this proclamation to restore our state authority to regulate abortion and protect life. Thanks to decades of conservative leaders, Missouri has become one of the most pro-life states in the nation, and our Administration has always fought for the life of every unborn child. Today, our efforts have produced what generations of Missourians have worked and prayed for: Today, we have won our fight to protect innocent life,” Governor Parson continued.

Governor Parson’s proclamation notifies the Missouri Revisor of Statutes of the effective date of Section 188.017 RSMo.

Section 188.017, or the “Right to Life of the Unborn Child Act,” includes several provisions:

Prohibits doctors from performing abortions unless there is a medical emergency;
Creates criminal liability for any person who knowingly performs or induces a non-medical emergency abortion and subjects his or her professional license to suspension; and
Protects any woman who receives an illegal abortion from being prosecuted in violation of the Act.
The “Right to Life of the Unborn Child Act” was included in HB 126 and contingent upon the U.S. Supreme Court overruling Roe v. Wade in whole or in part. Governor Parson signed HB 126 in 2019.

Governor Parson’s Administration is coordinating with the Missouri Attorney General to quickly resolve any litigation against HB 126 before the Courts that is currently preventing implementation of the law.

…providers in states eager to embrace draconian restrictions. I will keep fighting to enshrine into law a woman’s right to make her own reproductive choices. We cannot let our children inherit a nation that is less free and more dangerous than the one their parents grew up in.

“Today’s landmark Supreme Court decision marks the beginning of a hopeful, new chapter for our country,” said Gov. Lee. “After years of heartfelt prayer and thoughtful policy, America has an historic opportunity to support women, children and strong families while reconciling the pain and loss caused by Roe v. Wade. We have spent years preparing for the possibility that authority would return to the states, and Tennessee’s laws will provide the maximum possible protection for both mother and child. In the coming days, we will address the full impacts of this decision for Tennessee.”

Tennessee Attorney General Herbert Slatery made a statement about the ruling. Tap here to watch.

“Today, the United States Supreme Court issued its decision in Dobbs v. Jackson Women’s Health Organization. It overruled the Roe and Casey decisions establishing a federal constitutional right to have an abortion. Today’s decision restores to the states their authority to regulate and prohibit abortion.

Tennesseans, through the affirmative vote of their elected representatives, amended the Constitution a few years ago to confirm that the Tennessee Constitution does not provide a right to an abortion and leaves the issue up to the General Assembly.

As a result of today’s ruling:

I will notify the Tennessee Code Commission in writing that Roe and Casey have been overruled, as required by statute.
We have asked the full Sixth Circuit Court of Appeals to stay the district court’s injunction of the timing provisions in our heartbeat abortion law, so that the law will go into effect as soon as possible.
In 30 days, after the issuance of the judgment, the 2019 Human Life Protection Act should go into effect in Tennessee.
To state the obvious: Dobbs is a momentous decision. Our republic is founded on the rule of law. Accordingly, we give respect and deference to the Court on occasions when its decisions align and support our state laws, and in cases when a decision might be contrary to Tennessee state law and what the majority of Tennesseans want, as was the case with the 2015 Obergefell decision.

Most importantly, after nearly 50 years, today’s decision gives the people of Tennessee a say on what the Court called ‘a profound moral issue.’”

“I have always believed that the best place to deal with this issue is at the state level. I have supported and advocated for policies like the Hyde Amendment and the Pain-Capable Unborn Child Protection Act that are backed by a majority of Americans. I have also supported exceptions for victims of rape or incest, and situations where the mother’s life is in danger.”

“The Supreme Court’s landmark ruling in Dobbs is courageous and correct. This is an historic victory for the Constitution and for the most vulnerable in our society.

“For 50 years, states have been unable to enact even modest protections for unborn children. More than 90% of Europe restricts abortion on demand after 15 weeks, but every state in America has been forced to allow it more than a month past that, after a baby can feel pain, yawn, stretch, and suck his or her thumb. Judicial activists declared that every state had to handle abortion like China and North Korea and no state could handle it like France or Germany.

“Not anymore. Now the American people get their voice back.

“The Court has corrected a terrible legal and moral error, like when Brown v. Board overruled Plessy v. Ferguson. The Justices applied the Constitution. They carefully weighed the complex factors regarding precedent. The Court overturned mistaken rulings that even liberals have long admitted were incoherent, restoring the separation of powers. I commend the Court for its impartiality in the face of attempted intimidation.

“Democrats’ disgraceful attacks on the Court have echoed Democrats’ outrage at Brown v. Board in 1954. Today’s Democrats are jaw-droppingly extreme on abortion. 97% of Washington Democrats support legislation that would effectively require nine months of abortion on demand until the moment of birth. Only 19% of Americans share this radical view but 97% of Democrats in Congress embrace it. They would rather attack our institutions than let the American people enact the reasonable protections they want.

“Millions of Americans have spent half a century praying, marching, and working toward today’s historic victories for the rule of law and for innocent life. I have been proud to stand with them throughout our long journey and I share their joy today.”

At long last, Roe is OVERRULED

This is a momentous day in America, when the efforts of generations of modern-day abolitionists comes to fruition. One of the most unjust decisions in American history has been overturned

“Today is a historic day, but we also remember over 60 million innocent lives lost. There was a lot of work behind the scenes before we achieved this incredible victory. Here are some of our efforts to protect all of Missourians, including the unborn.”

I stand ready to take civil action against anyone that tries to stand in the way of women seeking abortions in Illinois. We will not go backward in our state. pic.twitter.com/H7aVjI7wM9

Attorney General of the Commonwealth of Kentucky Daniel Cameron released this statement. 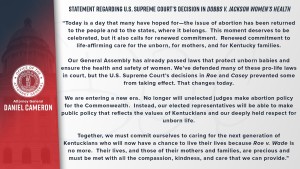 I am angry but unafraid. Today, and every day, I will continue fighting for a woman’s right to bodily autonomy. I am disappointed but determined. Although we have known for weeks that our right to bodily autonomy can be a matter of debate, and can be taken away with a single decision, we cannot avoid the deep ache caused by this ruling. It is a dark day for our country.

I ache for the women across the nation who fear for what comes next. I ache for my daughters, who are losing a constitutional right that was afforded to their mother. I ache for the lives—the lives of BIPOC women, in particular—that this decision has put at risk.

The road ahead is hard and treacherous, but raising our voices is now more important than ever. Those who want to restrict our freedoms and strip away our rights may call today a victory, but tomorrow and every day we will be at the frontlines to push back.

To everyone affected by the Supreme Court’s decision to overturn Roe V. Wade, you are not alone in the journey ahead. We stand with the activists, organizers, and community members across the country in the fight for bodily autonomy, and we will continue to ensure that Illinois will always be a bulwark in that fight.