Sikeston high school has found a way to help its students feel confident and ready to take the test.

Senior Joseph Heckemyer says that he has been preparing for the act since his junior year and these study groups help things go more smoothly.

“That’s really helped a lot because it’s like I compared taking the ACT to like driving because the first time you drive you to have no idea what you’re doing no idea what to expect and it’s really like confusing like as soon as you start going to these study groups everything starts making sense and like starts getting smooth,” said Heckemyer.

Senior Harley Hunter says she has seen a positive impact from the classes by her score rise.

“It’s really important because it’s improved my score by three points for me and I’m wanting to get three higher and it’s really helped me just like think of it a different way instead of getting frustrated when I don’t know it,” said Hunter.

But for those students that missed the December ACT prep, Sikeston offers more sessions second half of the year.

“We offer them we start offering them October December February and April,” said Lape. 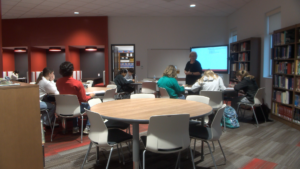