JACKSON, Mo. (KBSI) – The sharp, intense heat that June brought almost had farmers in the FOX23 viewing area worried for their crops.

According to the state of Missouri, more than 63% of the state is abnormally dry, while another 20% is in a moderate drought state.

At the Jackson, Missouri farmers market, it doesn’t seem to be too much of an issue.

“We’ve been very fortunate in where we’re at in Egypt Mills,” said Ron Warhurst, a farmers market vendor. “We’ve been getting nice rain every now and then. Soy beans have come up, black berries are doing very well. We’ve had a lot of good rain, I wouldn’t say a lot but we haven’t had any floods.”

But the lack of rain and high heat in other areas gave some farms a bit of a scare.

“We didn’t expect it to get that hot that early but, everything has been manageable,” said Olivia Brumleve, farmers market vendor. “We didn’t raise our tomato or peach crop, but we did have to raise other things just to balance it out a little.”

With August around the corner, the farmers market is still in full swing. You can find the market every Tuesday, from noon to five at the St. Louis Iron Mountain  until the fall. 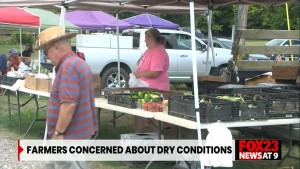