JACKSON, Mo. (KBSI) –  Smoke alarms are some of the most important but easily forgettable safety devices in your home.

According to a report by the National Fire Protection Association, the risk of dying in house fires is 55 percent lower in homes with working smoke alarms than in homes with no alarms or none that worked.

Captain/Paramedic at Jackson Fire and Rescue Ryan Davey says that it’s important to check your alarms twice a year.

“Even though it works right now when you do change batteries and do check, it doesn’t mean that it’s always going to continue to keep working so check your manufacturer’s expiration date cause they’re usually about 7 to 10 years long,” said Davey.

Working fire alarms will continue to operate, even in flames.

“Go into actual fires itself, one of our big things that we do check is that smoke detectors were working in working order and fashion. We’ve had them actually where they have almost disintegrated and melted and they were still activating and working during the actual fire,” said Davey.

The test process is very simple.

“On the back here we have an expiration date. I said on average it’s about 7 to 10 years. As long as it’s within date, your battery is still good. There should be some type of a button somewhere on the detector if you press and hold it should sound after probably about one to two seconds,” said Davey.

Jackson Fire and Rescue says residents can call and schedule a time to meet up and check your smoke alarms or even replace them. They can also go over home evacuation plans to make sure you and your family are prepared for the worst case scenario.

“It’s very important to make sure that these are working, that everybody is up to date on their evacuation plans and routines. You never know when an emergency is going to happen. You don’t want to have to be scrambling at the last minute to possibly forget what it is due to the excitement. But if everybody is practiced up on it, everything is working. Hopefully we’ll be saving lives,” said Davey. 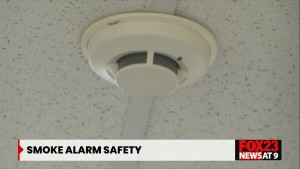