CARBONDALE, Ill. (KBSI) – Violent crimes such as gun violence have been on the rise for years.

Carbondale City Manager Gary Williams says the city and Southern Illinois University Carbondale joined together to research the nature behind the gun violence in the city.

“What they did is they took a lot of data, police calls from service, lighting in Carbondale, weather, a broad range of variables that they did an analysis of,” said Williams.

Williams says that since the pandemic they have seen an increase in gun violence.

According to the report, from 2020 to the present, the Carbondale Police Department reviewed reports to flag confirmed shootings.

Across the two-and-a-half-year-period, there were 146 confirmed shootings.

“The pandemic, we’ve seen an escalation in violence in general and we’ve seen that nationally. We’ve seen more people that have been confined to their homes, there’s been less social interaction, those types of things create stress, and they fuel violence,” said Williams.

But thanks to the report, the City of Carbondale now can work on ways to help the community.

But the city hopes to build a strong relationship with community members.

“We know the value of having those neighborhood-based relationships; having relationships with community leaders … people that can bring things to our attention but also, I think the other part of it is when you have a more cohesive community between the city government, law enforcement, and the community, you are going to have a little more community pride,” said Williams. 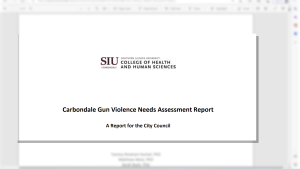