CAPE GIRARDEAU, Mo. (KBSI) – Three days a week a special group of resilient people lace up their gloves and prepare for a fight against Parkinson’s disease.

The class is held at the Christian Boxing Academy in Cape Girardeau.

Parkinson’s disease is a nervous system disorder that affects a person’s ability to control their movements.

It’s a disease with no cure but Gene Garrison, the Parkinson’s Exercise Program director, says their program is about fighting off the disease for as long as possible.

“That program is about quality of life you know we follow parking we don’t let him take advantage of us. So we fight it. We fight. We fight it and in that fits in with boxing because boxing is fighting,” said Garrison.

It also attracts volunteers like Kathy Leimer who learned about boxing, and then passed that knowledge on to others.

“I’ve just stayed and volunteered,” Leimer said. “Parkinson’s doesn’t discriminate. You know you could be women or men, whatever.”

The boxing workout and mix of calisthenics and weights give a challenging workout for participants. With workouts focused on maintaining balance and coordination and improving speed, it helps build the foundation needed to do everyday tasks.

“This class has been great for me,” participant Tim Estes said “When I started, I had to have helped get out of my chair and I’ve come a long way.”

The class is every Monday, Wednesday, and Friday at 8:30 a.m. The supportive team behind the class welcomes all volunteers and people affected by Parkinson’s to join in on the workouts

“Don’t let Parkinson’s take over your life there is some quality of life that you can get it takes a little bit of energy to get that done but it’s well worth the time and the effort,” said Garrison. 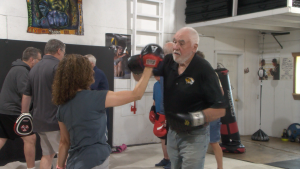 Some things to remember as winter approaches