Capaha Park and Broadway Street in Cape Girardeau getting upgrades

The project will replace the existing storm water pipe with a box culvert.

Doing this means having to shut down Broadway Street.

The project starts September 19 and is expected to last until October 3 depending on weather.

The closure will begin and end on Sunset and Penny with detoured routes along the way.

“So the project is adding and restoring some of our existing storm water structure to try to help control storm drainage during rain events,” said Jake Garrard, City of Cape Engineering Project Manager.

The dredging of Capaha Park will also help with storm drainage in the area.

Garrard says the area of Broadway and Perry Avenue will get underground attention that will also help with storm drainage efforts.

The dredging project in Capaha Park has been ongoing for a while and is expected to be done by this fall.

“It hadn’t been dredged out since the 1950s, so it was starting to fill in with silt and other debris,” said City of Cape Parks Division Manager.

Davis says the newly renovated pond is expected to be a more popular fishing area when open again.

The city of Cape is working with Missouri Department of Conservation to bring several types of fish for the pond.

With both projects underway, Broadway Street and Capaha Park will be heavy with construction.

Capaha Park and Broadway Street in Cape Girardeau getting upgrades 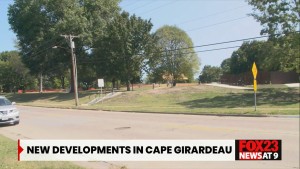